Error or forgery on the Stele of Merneptah, known as Israel Stele

The objectives of this article are twofold. First of all, it presents one information omitted in Chapter 11 of my last book in French language De cette fresque naquit la Bible (The Lost Fresco and the Bible ). Then, it denounces an error, or more probably the forgery of an archaeological document of the greatest importance.

The stele of Merneptah contains the oldest mention of Israel in an extra-biblical document. Flinders Petrie discovered it in 1896, at Thebes, Egypt, in Merneptah’s mortuary temple. Merneptah was the son of Ramses II. The stele describes the military campaign undertaken in 1207 B.C. against the Libyans, and, eventually a campaign to Canaan by which a group of people named Israel would have been destroyed. One reads in lines 26 to 28 of this stele, according to the official translation: The princes are prostrate, they say: let us be in peace! Nobody any more raises the head among the Nine Arcs. Tehenu is destroyed; Khati (Hittites) are in peace; Canaan is captive like its demons, Ashkelon is conquered; Gezer is captured; Yanoam became non-existent; Israel is devastated, it does not have more seed; Kharu became the widow of Egypt. All these countries are pacified. All those, which were in revolt were subdued by the king of Egypt of North and the South…

Since its discovery in 1896, the biblical historians of any obedience have tried to demonstrate the validity of the destruction of Israel by the armies of Pharaoh. However this interpretation is false and the polemical discussions around it have no grounds.

The hieroglyphic reading of the word translated by Israel is “ iisii-r-iar ” and, in my book, I largely extended on its meaning. I have demonstrated that “iisii-r-iar” is in fact an egyptian sentence meaning: those exiled because of their sin. Pharaohs Ramsès II and Merneptah used this sentence when talking about the exiled Akhenaton’s followers, forced to quit Egypt. The name of this people iisii-r-iar changed into Israël, through the alteration of the letter r into l.

I had however omitted a detail, discussed in this present article. It relates to the sentence Yanoam became non-existent, which directly precedes the mention “ iisii-r-iar ”. As I will show it here, this translation is entirely false, because it results from the falsification of one hieroglyphic sign.
To begin with, let us look at the transliteration of line 27 of the stele, published in 1909 (cf: P. Lacau, Steles of the new empire (general Catalogue of Egyptian antiquities of the Museum of Cairo, Cairo, 1909):

Line 27, reading from left to right, with the mention “sic”

We notice that in the sentence Yanoam became non-existent a group of hieroglyphs (the eye Re + the vulture aa) is not translated, but is marked sic. The transcription of the hieroglyph represented by the bird vulture is thus doubtful, just like the sentence Yanoam became non-existent. Consequently, the significance of the remainder of the line, in particular the part comprising “ iisii-r-iar”, Israel, is also doubtful.

The tracing with chalk

The engraving of the hieroglyphs on this stele is rather coarse. This explains why, since its discovery by Flinders Petrie in 1896, one over-traced them with a chalk stick, in order to highlight them and to facilitate their reading.

Chalk tracing on the hieroglyphs of the line containing sic, photograph of the original, reading from right to left. (click on the figure to enhance it)

The drawing with chalk of the vulture aa is precise, however it carries the mention: doubtful reading sic. When I began the study of this stele, at the end of the Nineties, I wondered why this vulture transcription posed problem, and was not translated. I did not find any answer in the literature, although there are nearly 200 articles published on the Israel Stele.  During our last visit to the Cairo Museum, I had asked my son Ralph to photograph this particular part of the stele, under the best possible conditions, by accentuating any contrasts, in order to visualize the true engraving of this hieroglyph sic.

In the photograph below one compares the letter aa (the vulture) in the upper line 26, marked A, with the same letter in line 27 (sic), marked B. 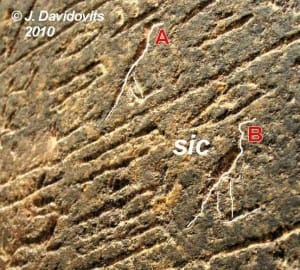 Tracing with chalk of the hieroglyph aa in the upper line 26 and the one in line 27 containing sic, photograph of the original, reading from right to left. (click on the figure to enhance it). 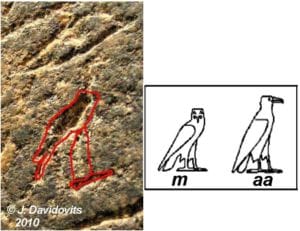 The red contour of the engraving of the hieroglyph suggests that of an owl, i.e. the letter m, and not the letter aa (click on the figure to enhance it).

We can now propose a reading of the missing word that was not translated until now. We read: rem-m and we translate into tears.

New reading and its consequences

The hieroglyphs group m tem wun may be separated in two parts due to the presence of the papyrus roller preceding the rabbit (wun). The sentence Yanoam became non-existent is changed into /iinaamm rem-m tem/wun iisii-r-iar (people)/, and the new translation suggests: Yanoam tears are finished; existing is iisi-r-iar, the people. 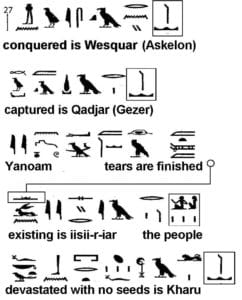 New translation of line 27 of the Merneptah Stele with highlighted punctuation (rectangles).

The falsification of the letter m (owl) into the letter aa (vulture) was probably the fact of the discoverer of the stele, Flinders Petrie, in 1896. From the beginning, he and his colleagues traced this hieroglyph with chalk in this way, because, in their mind, Pharaoh Merneptah must have attacked and destroyed Canaan nations, in his chase of the people of Exodus, Israel.

In the edited line 27, the people iisii-r-iar (Israel) are not devastated. On the contrary, they exist. This new translation is in agreement with the teaching of Egyptology. One knows that the armies of Merneptah neither attacked nor crushed the nations and people of Canaan, since their action was limited to Libya, in the North-West of Egypt. Merneptah quite simply makes the report of the general situation of Egypt and its neighbors, Canaan included. The mention, line 27, according to which Israel does not have any more seeds (cereals) thus resulted from the falsification of the text. It relates rather to the people mentioned in the next sentence, namely Kharu, i.e. the Hittites. This interpretation is proven by archaeology. It is known that Merneptah dispatched cereals from Egypt to the starving Hittites (Khati and Kharu), victim of a famine.

Nevertheless, this chalk trace was maintained on the Merneptah Stele, until today. To my knowledge, no Egyptologist, nor biblical historian, ever called into question the reading (rather the non-reading) of this forged hieroglyph.

For any further information: