30 years after my invention of Geopolymer cement in USA, at Lone Star Industries (Pyrament cement), this project marks a very significant milestone in engineering – the world’s largest geopolymer concrete project, so far. BWWA was built with approximately 40,000 m3 (100,000 tonnes) of geopolymer concrete making it the largest application of this new class of concrete in the world. The geopolymer concrete developed by the company Wagners, known as Earth Friendly Concrete (EFC), was found to be well suited for this construction method due to its high flexural tensile strength, low shrinkage and workability characteristics. Heavy duty geopolymer concrete, 435 mm thick, used for the turning node, apron and taxiway aircraft pavements, welcomes a heavy 747 cargo for regular air traffic between Toowoomba-Wellcamp BWWA airport and Hong Kong..(See the video on my visit to the Toowoomba-Wellcamp-Airport).

On October 3, 2015, Joseph and Ralph Davidovits flew from Sydney Airport to Toowoomba-Wellcamp-Airport, for a visit to the company Wagners. 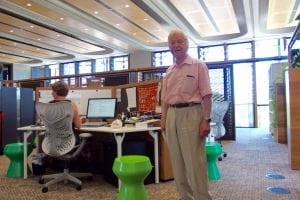