The revenge of the ridiculed scientists.
In September 2006, my article Publish or Perish: the disease of scientific research highlighted how the 2005 Nobel Prize winners in Medicine had been forbidden for years to publish the results of their research, simply because they contradicted what was taught in the faculties world-wide, and accepted by the majority of the scientific community at that time. The recent 2011 Nobel Prize in Chemistry, Daniel Schechtman, experienced a situation even more vexing. When in 1982, thirty years ago, he made his discovery of quasicrystals, the research institution that hosted him fired him because he “threw discredit on the University with his false science”. Why? Because he had the misfortune to make his discovery alone, without the help of other colleagues. Indeed, for the scientific authorities and institutions it is fashionable to proclaim that research is above all a team work. So that any individual discovery is suspect, subject to ridicule, worse, suspected of manipulation of results and scientific fraud.
The press release from Reuters News Agency dated of October 6, 2011 was entitled: Ridiculed crystal work wins Nobel.
I have often quoted in my books the philosopher Schopenhauer (1788-1860): the establishment of the truth passes through three stages: during the first it is ridiculed, in the second it is resisted, in the third it is considered as self evident. Daniel Schechtman has crossed the 3 steps. He was the subject of fierce resistance from one of the greatest scientists of the 20th century, Linius Pauling, Nobel Laureate in Chemistry and Peace Nobel Laureate. In 1985, he wrote: Daniel Schechtman tells non-sence. There are no quasi-crystals, there are only quasi-scientists!
Those who follow my research on geopolymer science know that I already went through the first two steps. Five to six years ago, we entered the consolidation phase, the third step. To see this, just look at the evolution of the number of scientific publications published each year on geopolymer science and applications.

Numerous laboratories around the world are presently working on the science I invented 32 years ago; as for myseff, I no longer publish (or very little) regular scientific article, spending all my energy to my books, including my basic book “Geopolymer Chemistry and Applications” (now the 3rd edition). 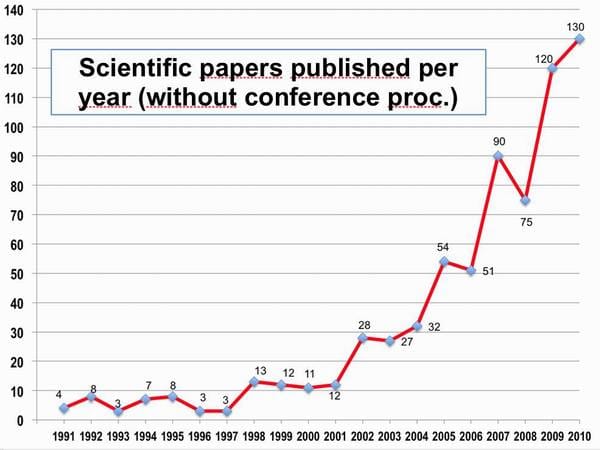 Until 1997, we had few scientific publications because most of my activity was also dedicated to the writing of patents (which are not included in the list of scientific publications). Then in 1997, colleagues from the University of Melbourne began to publish scientific papers, and in recent years numerous laboratories yielded an exponential acceleration characteristic of the third stage.
For any further information please visit the Geopolymer Institute

Geopolymer Revolution on the Move