I have an interesting Film/TV documentary project, and I am looking for a serious producer.

I discovered the most ancient genuine text copied word by word in the Bible.

It is an ancient Egyptian fresco unearthed in 1935, in Karnak, Southern Egypt, dedicated to the greatest scribe and genius of Egyptian antiquity: Amenophis (Amenhotep) Son of Hapu (1437-1356 BC). 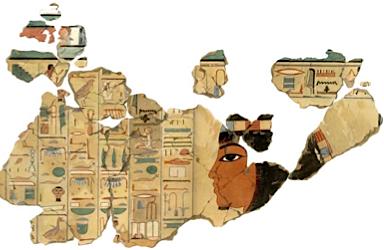 This 3,363 year-old document tells how Pharaoh Amenhotep III (the father of the heretical Akhenaton) greatly honored his closest counselor, Amenophis Son of Hapu, Egypt’s foremost éminence grise whose position was second only to Pharaoh’s in power. According to my recent studies already published in French (see my books La Bible avait raison, 1-2 and the english summary et The lost fresco and the Bible), Amenophis Son of Hapu would be the Patriarch Joseph whose fabulous story is outlined in the Bible (Genesis 41, 40-46) and in the Qur’an (Sura 12 (Yusuf), 54-56). It sheds light on the interpretation of the Holy Scriptures (Torah, Bible, Qur’an).

To visualize the fresco and the comparison between Joseph’s (Genesis 41) and Amenophis’ glorification, download this PDF file. Thus, the connection between Joseph and Amenophis Son of Hapu is self evident. The fresco shows additional surprising details that set the first solid milestone in the historicity of the Bible, back to antiquity. It is definitively the oldest proof ever found so far, and the oldest date in the historicity of the Bible.

The problem is the following: nobody knows where Amenophis’ fresco is presently located!

Is it buried, or was it destroyed, if yes, by whom? Is it abandoned in a lost storehouse, in Cairo, in Karnak (Egypt), in Europe? We have to find it, because it deserves to be displayed in the major museums, worldwide.

In my point of view, the fresco will be listed as one of the most important archaeological discovery of this century.

The only document we got is the copy made by the two French Egyptologists, Claude Robichon and Alexande Varille, who initially unearthed the fresco in 1935, and published their results in 1936 by IFAO, Cairo. Yet, they did not make the connection between Joseph and Amenophis. The fresco remained totally forgotten or ignored by the mainstream of Egyptologists and biblical historians until I discovered their book in 2005 by happy accident in a French university library.

My conference on Ceramics & Brotherhood, on line