Continuing my visits to the Czech scientific institutions, I met with Professor Miroslav Verner, professor of egyptology, director of the Czech Institute of Egyptology. The Czech Mission in Egypt is in charge of the site at Abusir, north of Saqqarah. One finds there the pyramids of the Pharaons belonging to the Vth Dynasty, small pyramids built after the large pyramids at Giza. They were made with small blocks of hewn stone and they have nothing in common with the enormous masses raised by the Pharaons of the IVth Dynasty: Sneferu, Cheops, Chephren and Mykerinos.

The first pyramid of the Vth Dynasty is that of Userkaf. It is not located at Abusir, but at Saqqarah. It represents the prototype of the cut stone pyramids. In my book La nouvelle histoire des pyramides , I write in Chapter 20:
“This is merely a heap of stones (…) But to tell the truth, it is the best the Egyptians could achieve using tools of stone and copper. What is more, the pyramid of Userkaf is more recent, which ought to mean that it should be as well built, if not even better than its predecessors. This hewn stone pyramid, built after the fabulous pyramids on the Giza plateau, are proof to the incredulous that the technology used was radically different from before, and that Egyptian society had had to adapt to a new context.” 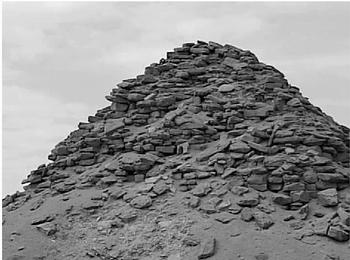 The Userkaf pyramid, made of small hewn stones

If the pyramids of the Giza plateau had been made of hewn stones, it is hard to explain such a fall of architectural quality, when stone became an abundant material? The architects of the Vth Dynasty should have been capable of building monuments equivalent in quality to those of Giza, even with smaller pyramids. Yet, this is not the case.

Concerning the pyramids, one is obviously facing two technologies developed within two different contexts. The first, huge and enormous, were built with agglomerated stone. Then, following the ecological disaster that occurred at the end of the IVth Dynasty, consequence of the over exploitation of agricultural resources (see in my book La Nouvelle histoire des pyramides), the pharaohs of the Vth Dynasty invented this new hewn stone construction.

It was precisely this new technology that Professor Verner and his team studied in Abusir, namely how to build a pyramid made of small cut stones that leads to a stable monument. It is obvious, and Mr. Verner agreed with me, that the method employed during the Vth Dynasty was very different from that of its predecessors. The technology used at Abusir may not be taken as an example to explain how the Great Pyramids (Cheops, Chephren) were actually built. This is an error of reasoning that the majority of the Egyptologists are doing without any reserve : they are wrong.

Encounter with the Venus from Dolni Vestonice, a 25.000 years old geopolymer ceramic