Book: They built the Pyramids : OUT OF PRINT

20 years after the best seller book: The Pyramids: an enigma solved,
after 20 years of new researches, and new discoveries,
you will understand why the theory is more alive than ever, why more and more scientists agree, simply because it is the truth. 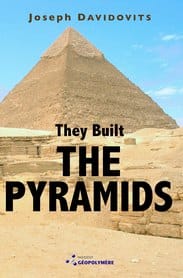 In this book, Professor Joseph Davidovits explains the intriguing theory that made him famous. He shows how the Pyramids were built by using re-agglomerated stone (a natural limestone treated like a concrete), and not with huge carved blocks, hauled on fragile ramps. Archaeology bears him out, as well as hieroglyphic texts, scientific analysis, religious and historical facts.

The book is OUT OF PRINT  and replaced by the new one in hard cover: Why the Pharaohs built the Pyramids with fake stones.

My conference on Ceramics & Brotherhood, on line